Inicio > WHY SHOULD WE ELIMINATE SUBSIDIES FROM ALL ECONOMIC ACTIVITY?

WHY SHOULD WE ELIMINATE SUBSIDIES FROM ALL ECONOMIC ACTIVITY?

In one of my cultural visits of this summer vacation, we went to a farm which was surrounded by gardens and all kind of agricultural land in Nice. I had the opportunity to talk to a man, who was never really interested in agriculture or the countryside, and who overall lived in Monaco and had many other businesses apart from supplying nearly all the markets from the region with fruit and vegetables. During our visit I asked him why he started with the idea of the plantations and the agriculture business, and he answered me that they are provided with good working capital and conditions for it, even though that the benefit margin wasn't very big. Later on, one of his assistants explained us the costs and the machinery involved in the production, and with so high input, I doubted about any benefit at all... and that was my next question. You would have put the same face as me, when they told me that right now they were at a breakeven point, but that they made benefits thanks to the subsidies from the government, which was one of the reasons why they didn't want to expand anymore, as if not they will get into red numbers. Incredible. They were receiving much more public income than any hospital, police station or school from the area. And that's the problem. The main agent against  free markets is always intervention, and this time the virus had a new name... subsidies.

All economic activities we can think of receive subsidies from the government, in a bigger or smaller way, but they actually do. This subsidies go against competition, the consumer and of course the liberalization of the economy, in two different ways: higher taxes, and an increase in prices forced by an intervened economic cycle. We can observe that Spain is one of the most controlled economies of the Euro zone, and in most ways because during the economic recessions period much more subsidies were given by the European Union, who was trying to increase supply, never thinking that the problem came from scarce demand and consume. International investors are not stupid, and they know that an intervened economy will always have higher prices and less incentive to consumption, which will leave a lower productive margin, making them emigrate with their money to much more free economic systems as: Hong Kong, Ireland, Switzerland or the USA. The main factor of this is because over controlled economies are always tied to any regulatory or political changes, which increases the uncertainty in the market, and money tends to fear.

HERE WE CAN SEE A GRAPH DEMONSTRATING THE GOVERNMENT EXPENDITURE IN SUBSIDIES ALONG THE YEARS IN SPAIN, COMPARED TO THE CAPITAL EXPENDITURE: 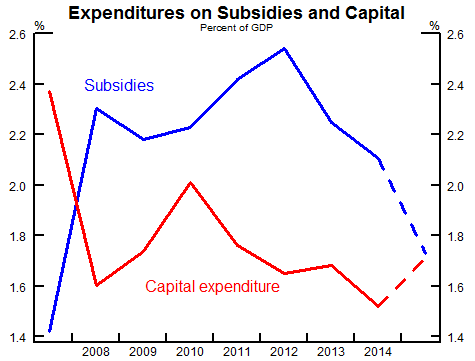 Reducing subsidies we will be able to adequate the investment demand and the real profitability, evading economic bubbles and of course reducing turnover effects of the economic cycle. The effect of subsidies in the market is really harmful in the mean-long term as it helps to generate a false effect of false demand to later on create an overcapacity leading to excess of supply, causing an increase in the cost of production and a consequent rise of prices which are harmful for the demand of consumers and reducing the demand for labor, as this two factors are generally derived, which will finally lead to higher unemployment rates, which will make many companies and industries break down in the long term, due to allocative inefficiency in the market.

Spain's general expenditure in subsidies and economic aids to different sectors is now nearly 5% of the country's GDP, but during the periods of economic crisis, this numbers haven't been reduced, but the have increased trying to impulse the economy, which generated an economic bubble in some sectors of the market as the construction one. In Spain, economic subsidies are present in everyday life of many companies and big enterprise, which makes them much more heavy and dependent on new government decisions , as receiving income constantly from the public sector, makes many firms overload their debt capacity, and prevents them from diversifying their supply and expanding their production to try and be more efficient, as with subsidies in fixed levels, this will lead them to higher costs and a loss of revenue, which makes reinvestment and internal growth much more difficult.

WE CAN OBSERVE A SIMPLE LINE GRAPH REPRESENTING THE EFFECT OF SUBSIDIES ON PRICE AND DEMAND FOR THE CONSUMER IN THE MARKET:

We can see that each day and more often companies are taking subsidies into account in their risk and debt analysis, giving them viability as a normal and fixed input element, which shouldn't be like that. Many valuations of costs and revenues consider subsidies as a fixed element of income for production, but they don't take in account that governments change the regulatory systems very often, leading to an excess of supply in the long term, and overloading the production capacity of the just mentioned enterprise.

And that's why international investors fear towards hyper regulated economic systems, as they understand that an atmosphere of business driven by government and public organizations will reduce enormously competition, efficiency and innovation due to their dependence on political decisions and governmental actions.

It's essential to change nowadays subsidies policies, reducing direct expenditure to try and decrease debt levels of public organisms, and try to increase consumption and production through fiscal incentives, mainly lower taxes and less barriers to entry the market, preventing bubbles and overloads in the sector. In the USA a few years ago, with Reagan as president the government introduced a measure called the tax credits, which not only reduced the Government public expenditure, but also helped to increase the internal demand and the international investment, through lower prices and higher wages, which lead to a bigger efficiency and made production and productivity levels rise enormously in a very small period of time, which was very attractive for capital and new enterprising, as the model was based in extreme competition in the market generating more efficient business plans, which is exactly what we need right now for Spain.

In conclusion, subsidies nowadays just generate an increase in taxes and credit tariffs, which is automatically followed by an increase in prices, which will reduce the demand of consumers, overloading the market with excessive supply, and creating allocative inefficiency. This is similar to reducing the wages of efficient workers and increasing those of inefficient, doesn't it sound crazy? Well, think about it... because subsidies are not the solution for a slow economy or for uncompetitive markets, and the only one who benefits from this is the government, who makes the economy much more dependent on them for much more strict regulatory measures.