Inicio > WHY IS IT MORE EFFICIENT A CAPITALIZATION PENSION SYSTEM?

WHY IS IT MORE EFFICIENT A CAPITALIZATION PENSION SYSTEM?

Now we can say that there’s or will be soon a government in Spain, but not an easy one, and not with easy chores. During the last weeks, many goals have been set for the new government by the mean of the population, and many people have indicated the public pensions fund as one of the major problems of the Spanish society nowadays. The Spanish pension system is based in share-out of funds by the population, and the quote each pensioner receives goes in relation of percentage with the last wages received during their working period. Actually, this system is clearly unsustainable, as new workers, don’t provide enough money to the pension fund, as to be able to cover pensions costs in the future, we are finding ourselves in a pay-as-you-go situation, where pensioners are receiving money from the actual worker’s taxation, and not from their saved incomes from the past, which is really the main objective of a pension fund, no matter what type. The problem actually in Spain is that pensioners don’t receive wages in relation to the economic growth during their epoch, but in relation with the RPI of the time they are living, which in many cases produces scarcity in the fund, or at least will produce it in the next 10 years. Otherwise, in Chile since the period of the 1980’s, a capital-based pension system has been installed, where instead of making people dependent on nowadays labor capital wages, invests the income into different assets and various markets, distributing between bonds of different states, stock market, derivate market or even in some cases private equity. This is done to diversify the capital and reduce the risk, assuring revenues back from the investment in many occasions, and reducing the risk of loss. Later on, the income the government receives from the reinvestment into the funds, is used to pay for pension quotes of the elderly, charging much less income tax to the Chilean population, than we do in several European and American developed nations. But why is the capitalization system more efficient?

Firstly, through the capitalization system, each citizen has an individual account; and not a general fund, which measures its retirement income, where each month, the contributed quantity is deposited into that account, being later on invested by the Fund Administrators. The profit yield earned from the investment is added to the personal fund afterwards and used at a later date to pay for the individual pensions of workers. During their active working period, workers don’t receive money from this accounts, even in unemployment situations, and most important of all, the government is not allowed to use this funds for other purposes which differ from direct investment. The capitalization system demonstrates a tight relationship between the wage earned during your working lifetime and the pension received, all along with the profitability margin. In Chile, all this work is done by the Pension Fund Administrators. The AFP’s are public enterprises, with the only purpose of generating benefit, by investing the Social Security contributions, into several asset funds, and within a tight law regulation, which provides safety and a clear base to the operation. There’s a lot of defenders of the share-out system, who say that in capitalization systems, if you receive a negative yield with the investment, this will reduce your future pension, and will destroy your initial base formed from income tax. This is not completely true, as many private or public financial institution provide insurance measures to give out the citizens at least their initial invested amount if the investment is lost, reducing the risk to just losing the profit margin. Even though the State controls the funds, its basic function in the pensions sector is just providing certain benefits to their contributors, and being able to reduce the effect of systemic risk on the system in situations as a downturn or recession. In the capitalization pension system, workers are able to choose; at least in Chile, in what financial institution they want to invest their money, at what cost, and most important of all, what risk do they want to take with their investment, taking into account the arousing profitability market.

IN THIS GRAPH, WE CAN SEE THE VARIATION OF SPANISH PENSION FUND CAPITAL THROUGHOUT THE YEARS: 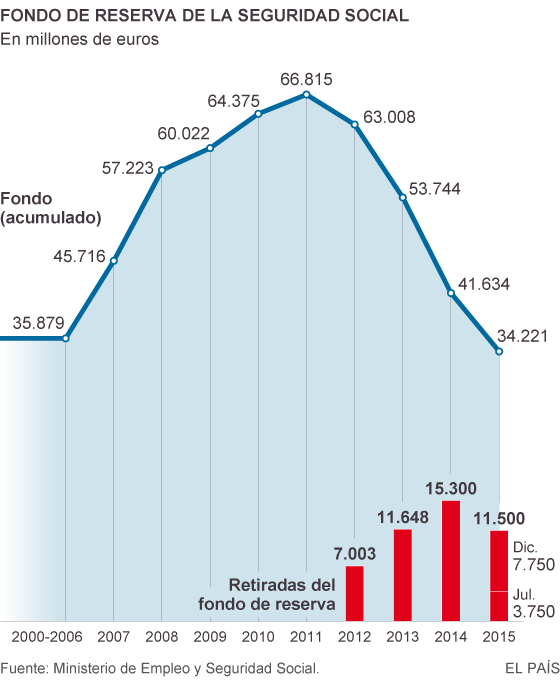 Second, in order for the government to be able to guarantee a minimum number of pensions, and to obtain a respectable amount of benefit from the investment funds, the State requires citizens to provide a 10% of their income through income tax just for the pension system, while in Spain the percentage of income tax in relation to the pension system is 28.3%, showing the clear tax relief the Chileans enjoy. Each trimester, the government sets a minimum profit yield margin for the pension funds into investment, which the Administrator has to assure to achieve. If the percentage required is not achieved, the citizens won’t be the ones to lose money, as the strict legal conditions from the capitalization system in Chile stipulate that the State will be the one covering the investment profit margin, and that the Administrator will be laid off and replaced. This increase the efficiency in the system, as in difference of many public workers in other countries, there exists very high competition in the Chilean capitalization pensions system, as if they don’t reach the desired benefit, the main workers for the investment funds will be fired, which in the mean term increases productivity in the sector even though of being publicly financed. There can be a case as in 2009, where the Administrator declares the pension system to be half way through bankrupt, where the State will have to provide some basic services. In case of the death of a pensioner during this period, the State will provide to his family at least 75% of the invested money, and in addition, the government, and just in case of payments suspension, will give out living pensioners 50% of their last wage as a minimum. Finally, the system is financed through an income variable tax of 10% for the pension funds, with a limit of 60%. With difference of other systems, the variability of this percentage tax doesn’t depend on the State fulfilments, but on the private decisions of citizens, who can rouse their contribution to the pension fund, as this money will be invested individually and not as a whole for each member of the system. It is true that maintaining a capitalization of pensions system is much more expensive than a share-out one in terms of payments for administration and services offered, but we have to remind that the fund managers in charge of this have a minimum fixed salary, and the rest of their wage s in variable terms depending on the 10% of the whole monthly profitability of the funds, which acts as an incentive to increase productivity and efficiency in investment, and leads to take risks which can be profitable in the future, but never in excess.

HERE WE CAN OBSERVE THE PROFIT MARGIN OBTAINED THROUGH THE PENSION CAPITALIZATION SYSTEM IN CONTRAST TO CONTRIBUTIONS IN CHILE, RECEIVING A BENEFIT MAJOR TO 11% OVER THE LAST 11 YEARS:

In conclusion, we have been able to see, how the capitalization pensions system is much more efficient in comprise with a share-out. Through capitalization, workers have to pay less tax income destined to pensions, as we can see from 10% tax in Chile and 28.3% in Spain over income. The lower income tax gives citizens a major disposable income, and overall freedom to decide what to do with their money, even if they want to invest it, save it in a fund or deposit, or spend it into goods and services, leading to an increase in consumption levels. This system will maintain a constant economic growth, through annual increases in GDP, while the pension returns will keep on increasing, and many of the yield margins from the national investment funds have a tight relationship with internal economic growth or external investment, which will also be attracted by this system, and good growth conditions, over stable bases. This are the principles of liberal economic growth, just as Hayek taught them, but to be able to make this function, the government has to reinforce tax decreases, which can only be done if the State is able to generate its own income through reinvestment into the financial market or private equity, and we can find a clear example of it in the capitalization pensions system. To end up, I would like to remind a phrase the philosopher Robert Nozick wrote in one of his books in clear reference to the income tax: “Taxation of earnings from labor is on a par with forced labor.”