Inicio > WHY IS AFRICA POOR?

WHY IS AFRICA POOR?

Two weeks ago, I had the opportunity to attend a course at the London School of Economics about economic history and development economics. One of the main themes taught throughout the course was the development of Africa as a continent through the last few decades, and overall why despite its economic prosperity and poverty reduction in last years, the inequality gap with the developed world continued increasing at a stable pace. This inequality has always been persistent, and while continents as Asia during the last few years have grown at incredibly high rates (7% or 8% in some cases as that of China), and reduced their inequality with the developed world, losing the denomination of poor country through the last few years, having just 1.4% of the population under the poverty threshold in 2014, according to official statistics of the World Bank. But the case of Africa, and countries as Zimbabwe, Congo or Sierra Leone hasn’t been the same. These three countries have registered poverty rates of 72%, 64% and 52%, all according to the World Bank. These data demonstrate that even though economic development has occurred, poverty is still astonishingly high. But why does this still occur nowadays? It all can be analyzed from a historical perspective.

When we talk about inequalities we are not only making reference to inequality in terms of wealth or wages, but also in terms of production conditions and availability of resources. In the first place, we can simply observe that the African continent is located in a vertical axis and in the lower hemisphere of the world. According to historical data, this location has always attracted bad weather and bad conditions for agriculture, with natural disasters being frequent and lowering the productive capacity of the economy, destroying the scarce existing resources at the moment of those events. As declared by the Food and Agriculture Organizationof the United Nations, soil in the African continent presents much worse conditions for growing crops than their competitors into the emerging economies, as could be countries as Thailand or China. On top of it, one of the main factors that can explain low productivity levels in the African continent could be the historical large disease environment. High temperatures throughout all the year along with very scarce precipitations have created the perfect environment for the development of dangerous bacteria and viruses, having a direct effect on the populations health. In relation to culture, African culture historically has trusted much less in medicine and developed at a lower rate in this field that some other cultures, as the Maya in Mexico. The greater mortality rate and greater frequency of diseases causes a comparatively lower life expectancy, which translates into less time of specialization and training on their job, with a constantly changing labor force that needs to learn those skills from the beginning. 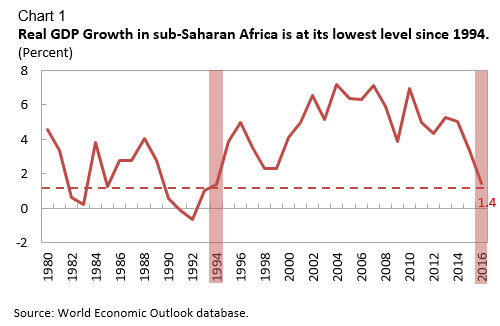 Historically, trade with African countries has been very low, and even nowadays with existing new technology, trade with those nations still remains difficult. Since the beginning of times, Africa has been a country with a high river density, and overall with rivers of fast and unstable water flows, which made commerce complicated due to the difficulties presented for navigation, reducing the exposure of African products to the world and their influence on international markets.

One of the most relevant factors; which persists nowadays, and can be very useful to explain Africa’s poverty, is population density. Population density in Africa is very low in contrast with the rest of continents. For example, in North American the population density is of 16.3 people per km2, meanwhile the population density in the African continent is of 1.9 - 3.8 people per km2 ,depending on the country. This lower population density generally makes division of labor much more difficult which leads to lower rates of specialization, causing lower productivity and making trade much more difficulty, as there will be less diversification in production techniques. To explain it easily if there is a large number of resources and the available working population is comparatively low for the needs of production, this will cause a greater concentration of workers in a reduced number of industries, which will cause a lower and worse diversification of output, consequently reducing opportunities of trade, as less countries will be interested in your products (the volume of trade in relation to the variety of goods and services produced in a country could be exposed in a Gauss bell curve to show probability of trade operations occurring).

But, how can this be solved?

Firstly, we should say that the GDP growth rate for Africa is estimated to be 4.1% for this year, going down to 3.6% in 2019. These data show once again the growth gap between African and Asian or Latin American countries, which form most of the emerging nations nowadays. At the same time, analyzing these data we can see that there is no existing convergence between Africa and developed countries, as the African continent has been the less participative in the process of globalization that has developed throughout the last few decades. This growth is not directly related to internal development of the continent, but to an increase in foreign trade and an increment of domestic demand for already produced goods (national goods in stock).

On the other hand, the gap between economic growth and job creation has been widening, and this is one of the main present and future concerns for the African economy. Job creation has been permanently behind economic growth since the year 2000, and up to us much as 50% differences have been registered (e.g. In a year when economic growth is 4% the rate of job creation will lag behind 2%). According to data of the World Bank, the African labor force is expected to grow by more than 2 billion by the year 2063, causing a demographic dividend, that will cause enormous unemployment and poverty if job opportunities are not expanded and improved through greater trade, investment and innovation in new business models. Industrialization is essential for African countries to eradicate poverty and create employment introducing into those new jobs the millions of Africans that join the labor force each year. Water, energy and transportation are some of the main infrastructures that need to be improved, and while the investment needs each year in the whole continent are near the $150 billion, Africans only dispose of half of that amount to invest in new projects of infrastructure development and improvement.

Africa has been historically poor and poorer than its competitors, but that trend can be reverted. We still have time. New protectionist attitudes from the main leaders of the developed nations won’t help at all. Despite of it, technological changes should be implemented though the private sector, helping to create new comparative advantages in trade for African countries, increasing their exposure to international markets and generating higher and more inclusive economic growth and social development. A more dynamic Africa is possible.