Inicio > WHY ARE TRADE UNIONS HARMFUL FOR THE ECONOMY?

WHY ARE TRADE UNIONS HARMFUL FOR THE ECONOMY?

Since the beginning of a stablished labour market, trade unions have been present and have interfered, even positively or negatively into this market. The competition between companies in the labour market is one of the factors that are most affected by this type of associations. Many economists have fought against trade unions during their whole life, giving arguments against them, but we don’t have to think about their effect just on workers, but on the economic system and labour market.

We all know that through competition in the market, higher wages will be produced, as companies will grow in the mean term, and will want to increase their labour investment, to be able to supply more. Here is where labour unions intervene; as if a firm want to increase their profits, they will try to balance their production costs, having to provide lower salaries to be able to hire more workers. Trade unions will try to force the government to raise the minimum wage rate, creating much more labour supply, but decreasing the demand for labour in an astonishing way, leading to unemployment.

Here we can see a linear graph representing how higher wages produce less labour demand and more unemployment applied to the market: 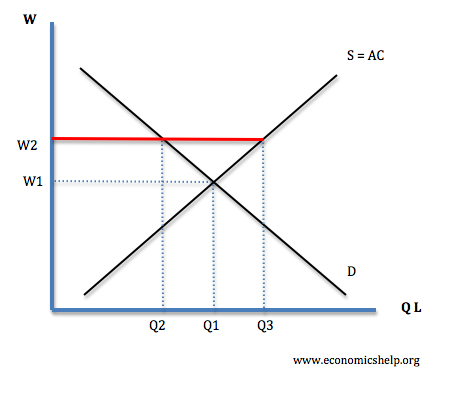 This occurs because trade unions are just worried for their own members, and their interests, without thinking on the direct and indirect effects this purposes and measures could have on the general labour market. We can find a very clear example of this, when in the year 2013, the principal Spanish trade union, UGT, proposed to the government to take a measure to close mean and big businesses on weekends and festivities, trying to ban the commercial liberty. So this shows, that they were just thinking on the income of their major members, without taking in account all the jobs that will be lost, if commences as El Corte Ingles will have to close on festivities and weekends.

Trade unions tend to promote general and partial strikes almost five times a year, which makes workers be really unproductive, making this lead to loss of sales and output, making the company lose money, and be unable to hire any workers at the end, and in case they are small firms, even go out of business. In a more moderate plan, trade unions support that workers work up to rule, so just in their stablished working time, independently of their productivity or efficiency, making the company in the enormous majority of cases being forced to fire the worker.

Inflation is one of the principal effects of trade unions, even though this only occurs in countries where trade unions have a very powerful representation. If unions bargain for higher wages, and they lead to set them over the rate of inflation, this will lead to economic problems in the whole nation, leading to inflation of the country itself, as they will be unable to support all the present unemployment. If look back to recent economic history, in the UK in 1979, a similar case occurred, where the minimum wage rate was increased by 27% in a one-year period, by the pressing of trade unions on the government, which generated enormous quantities of unemployment. It’s true that if we find ourselves in a monopoly market system, trade unions will be able to balance wages without reducing unemployment, but this are very strange cases, as in a normal system, higher wages lead to lower demand for labour.

If we look at this chart, we can see how production in manufacturing increases in a huge way when there are no unions intervening in the labour market:

Many governments give subsidies to unions, and is more, many trade unions live from the subsidies governments give them. The solution for eliminating trade unions partially, or just reducing their power, is giving more protection to standard workers, but also taking care at the same time of employer firms production and revenues, as having a balanced labour market is essential in any type of country, but mostly on those where the tertiary sector is the principal one, where economic freedom is the base, and the only useful tool to fight against inflation and unemployment. Because if an economy works well, higher wages will come by their own feet, as forcing them is not the solution, because everything has its own time, and there is time for everything.

In conclusion, trade unions restrict employment by just increasing the wages of their own members, which produces a cut on supply and revenues of the employer companies. The conditions and effects of trade unions in the economy, lead companies to automation, to reduce costs, which will lead to a permanent loss in jobs availability. If we balance the labour market, we can see that trade unions force increases in wages of approximately 10%, but this leads of raises in unemployment of 13% in the long term, which makes the market to be less competitive and efficient. As always, the solution: economic and commercial freedom, which provides major reinvesting in production, to increase supply of their product by a bigger demand.