Inicio > WE DON'T NEED THE IMF!

WE DON'T NEED THE IMF!

Recently this week, I was studying the effects of the Weimar Republic in causing the First World War, and consequently the effects of this war on the global economy, which brought up to my mind the foundation of the World Bank and the International Monetary Fund, organisms which nowadays are outdated and totally unnecessary. More concretely, the IMF was created in the decade of the 1940s to generate economic stability in the different economies around the world, but today, the fund, doesn’t accomplish any of its main historical function and it’s not more than another regulatory organism, with the only indirect intention of setting barriers for commerce and generating debt in the long term. When it was first set up, the IMF had very necessary functions as the world economy was broken up into pieces after the Second World War, and its effects were having great consequences on many nations, which left currencies trembling, vanishing all the global trade that before existed. At the moment, the IMF, led by the most powerful countries in the world, was used to inject money in different markets and nations to improve economic growth rates through leverage, which gave some grey results, but which were useful to get out of the greatest crisis in history. Even though that in the short term the policies were very useful and efficient, we can observe that in 20016, 48 out of 89 countries which received loans from the the IMF have not improved their GDP levels per capita, and out of those, 32; mainly African countries, have increased their debt levels due to this loans, without having any productive potential, reducing primarily the living standards of their people.

Spain is not in the case of being neither one of the countries which received money in the 40s or neither of the ones who gain growth with this operations, but incredibly, we are one of the major European contributors for the IMF, and we have never benefited from it! Spain provides in mean per year 4.7 billion euros to the international organisms, just for its maintenance, and in consequence of this, the congress should therefore ask to audit the accounts of this type of public spending, and decide whether if it is effective and profitable for our country this output of money per year, taking into account or own internal economic trembles. As many world citizens, I’m not confident in the IMF as they are a really closed organization, which doesn’t tend to promote free trade, and overall gives enormous loans each year to public and private equities without making them visible for general analysis, and the Spanish want to know in what are their abusive taxes spend. We should ask the IMF also, to promote economic liberalism and free trade, by supporting pacts as he TTIP, on which they haven’t made any declarations, and which are of crucial importance for global commerce over the next decades or even century. And the most important fact about the fund, is that it has never generated its own income, and has always relied on the tax collection from its donors, forcing them to have a tighter fiscal policy, reducing the population’s income levels and their consuming capacity.

IN THIS GRAPH WE CAN OBSERVE THE IMF LENDING LEVELS:

Secondly, it is of great importance to admit that the IMF is clearly outdated of nowadays necessities, and they are in need of adaptation for the needs of markets in the XXI century. The financial system has varied enormously since Churchill’s and Stalin’s time, and even though the IMF keeps trying today to maintain global financial stability, we are not anymore in need of any regulatory organisms to bust economic growth or facilitate trade, and is more, they just difficult even more all the previous actions. The enormous speed at which the private market has grown since the creation of the IMF has generated an enormous margin of effectiveness with public loans, so explained easily, if you after the war needed 100,000 “euros” (let’s use it as standard currency), nowadays you need three times more, but the central organizations, and not only the fund, keep on offering the same value per loan, which slows down the economic cycle. Nowadays, private transactions per day are over 2 trillion euros in the financial markets, while the public sector expenses per day are 220 billion in contrast… for which I don’t complain, as the predominance of the private sector in the economy is mainly positive; but which is used to demonstrate that the IMF today doesn’t have any primordial employment. Those who are the 40s had a meeting at Bretton Woods in an ugly and cold road hotel room, would be in disappointment with what I’m going to say, but it is true that in 2016, more that 75% of expenditure in infrastructure, technology and development comes from private hands, which helps to increase efficiency in our daily life, and economic growth over a mean period of time.

Private investment has grown since the 40s period more than 60%, while public expenditure levels globally have fallen by 23%, which shows that nations following the market system don’t want to be anymore attached to the IMF or the World Bank.  Nations don’t want to be dependent on them in a long term assistance, which doesn’t do anything else, apart from generating external debt, and producing a negative balance of payments, as most of the countries in the last decades where long term users of the IMF loans, generating consequently higher interests and forcing several governments to increase taxes. Evermore, the IMF forces their loaners to accept very strict conditions and forces them to follow several economic policies, that in their minds are useful for higher economic growth, but that haven’t got even a liberal point, so imagine how they end up…

GLOBAL GROWTH RATES (NOTICE THE DOWNTURNS IN PERIODS WHERE STATE INTERVENTIONISM IS GREATEST): 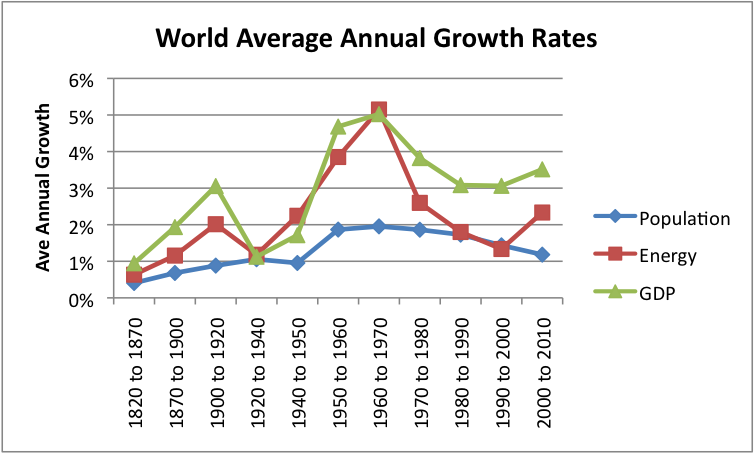 In conclusion, we should recognize that the IMF has already accomplish their primary function, but that when the financial systems left over the gold standard the functionality of public organisms decreased enormously, and that the IMF is facing a great abysm if it’s not prevented beforehand. The IMF has been doing completely unnecessary things over the last years, that have only been useful to destruct certain economic sectors and slow global trade, generating in some occasions deep downturn situations. And to end up, I would like us to keep in mind one of my favourite quotes of one of the bests economists over history: “Emergencies have always been the pretext on which the safeguards of individual liberty have eroded”- Friedrich August Von Hayek.