Discussing with Socialists is usually a curious and entertaining activity. Just overcoming the basic economic and political facts, Venezuela and Cuba used to enter our conversations in the past, but since a year ago or so, these themes seem to be irrelevant for them, just because failure constrains them from expressing their support to “revolutionary” dictatorships, in which countries, each day tenths of people die.  But nowadays, those who before portrayed the magnificent policies carried out by Hugo Chávez, and now argue that they failed because they weren't socialistic enough, tend to have changed their speech from Venezuela to Nordic countries and its lastly exuberating economic growth. Obviously, both systems are far from contrastable, but in Europe, we have been sold throughout the last few years the perfect available society: one with an enormous and overloaded State, low inequality levels, sustained economic growth and a gigantic bubble of public expenditure. We have acknowledged that these countries are not libertarian, and neither fit into the classical definition of “Capitalism” … so, what can they be considered? Are their prosperity facts reality or a myth?

The truth about these economies is far from expected, they are neither Socialists nor Capitalists, and can be on many occasions interpreted as mixed economies… yes, the kind of “mixed economies” which are similar to a Socialist State model in its “Diet Coke- zero calories” version. We should remember always, that one of the major causes of their prosperity, low unemployment, and overall growth is a deregulated labour market, and in which; independently from external opinions, their models are based on taxing to death workers and pensioners and freeing up entrepreneurs and corporations, leading to supply-side incentivising and creating excess supply in the market, which includes the primary and secondary sector. Social expenditure tends also to be furthermore developed and inflated than usually exposed, and for the sake of Libertarians, many services which in Spain will be comprehended as “basic and unreplaceable” in most of these nations are provided through a PPP (Public Private Partnership). 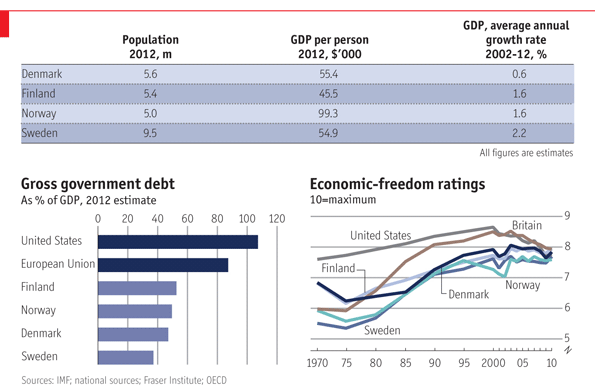 If we focus ourselves on the per capita income, we will see how at first sight, with a purchasing power still in pre-crisis levels, in Denmark it is of 33,000 euros, which is 32,700 for Finland and just around 35,000 in the case of Sweden. In contrast, our nation; Spain will have a per capita annual income of 25,000 euros. A free economy with liberalized markets as the USA will have mean income of 42,000 (euros) annually, being superior to those Nordic economies, and also achieving higher purchasing power and life standards. This also shows that low taxes on each country and overall on its citizens; as Income Tax, or in an indirect way the Corporate Tax, will have effects on reducing achievable incomes of workers, and leading to a greater inequality, caused by the powers of the State and not the market forces. By observing in mean how many goods and services were produced last year in these range of Nordic countries and how many of these goods reach each individual in society will indicate prosperity and development of the country, as it eliminates factors as inflation or currency appreciation in the economic analysis, which finally tends not to be efficient as the indicated facts will be the quantity of goods and services and not the real value traded.  Therefore, consumption per person will be a much easier way to identify how many consumption goods and services; including the basic ones as health or education, each individual has afforded to purchase. While some economies, mostly in emerging locations are able to grow 5%, having only 40% of debt over GDP, in contrast we can position Finland, which grows at a 1.4% annually while it has more than 63% over GDP of public external debt.  This short fact implies how the growth scheme of each economy is based on its productivity and overall supply, along with a reduction in costs and regulations and not so much on government intervention and financial supply-side policies.

To be fair I should also mention, that Nordic economies are a clear example to follow when talking about saving and private austerity, as for example in 2015 Denmark citizens had more than 31% of its overall patrimony invested in financial product and services, mainly deposits, without taking into account the housing sector, which will sum up to near 70%. This great saving rates caused Nordic economies to be ones of the least affected nations during the economic crisis suffered during the last 10 years, which was achieved by maintaining much lower debt-related consumption levels than Spanish or American citizens, which in many occasions nearly burn their credit cards even for buying a pencil. While dilacerating of joy when observing its private consumption rates, we can admire how even though they have extremely low private debt levels, they still spend nearly 22,300 euros annually of their wages in consumption goods and housing, which are valid data for Finland and Denmark. Many could argue that Spanish consumption rates are similar, being of 20,300 euros per year, but we should also take into account that our savings are contracted by 20% in comparison to Nordic ones. The private consumption rate over aggregate demand in Denmark is of 72% and Sweden 79%, being 119 times greater than in Spain, which shows that we still have much to learn about. 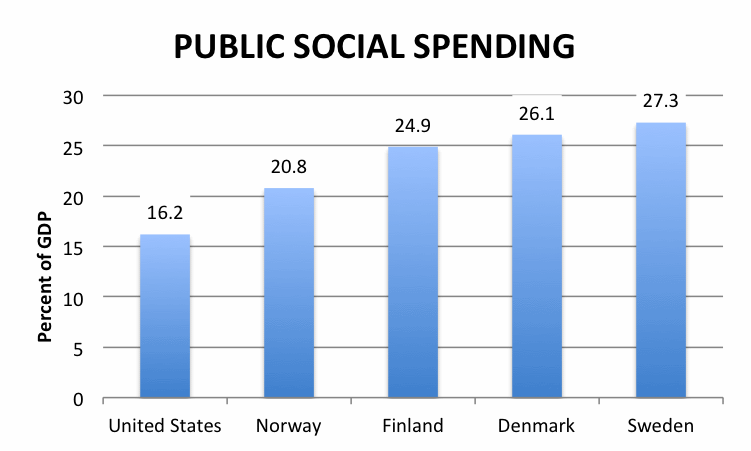 In conclusion, a great number of occasions, even Socialists or we, libertarians, tend to lead Nordic economies towards our speech and portray them as an example of our ideal economic system. The Nordic states are well managed mixed economic systems with a soft smell of socialism when talking about government intervention in the market through subsidies, or when observing its contrastable small GDP growth… taking into account that over the last 10 years some of these nations, as Finland have expanded their debt over GDP by more than 30%, nothing of the size of Spain or the USA, and not even mentionable in the case of Venezuela or Cuba, with which we started this article. As with everything in life, we should learn to take home only those positive things and leave aside all of those that can bring us contracyclical effects. In this case, we should fill up our luggage of labour market deregulation, inexistence of minimum wage (as in Denmark), and relatively low Corporate tax of 22%, learning economic freedom and acquiring sustainable models while enjoying our journey to the mystical Nordic economies.