This week I received astonished an announcement by the Italian government that most of economists and journalists already expected. The Italian government declared that it was going to bailout two different banking institutions by a total value of up to 17 billion euros, taking us back to the immense and dreadful bailouts from the 2008 financial crisis. Most of these provided funds will be used to cover the debt wholes of both entities that Intesa San Paolo is acquiring, which are Veneto Banca and Popolare di Vicenza. Most libertarians and merely people with common sense will agree on the point that preventing perpetuating illiquid and insolvent banks it just a matter of logic, and promoting a bail-in alternative will be much more economically efficient and just to contributors. Italy has been in a recessive period in the banking industry for more than a decade, and this has been displayed on its near imperceivably low economic growth, and how the Italian economy as a whole and mainly its financial sector has reacted negatively to fractional reserve banking.

One of the main causes of the Italian banking crisis are the tight and extreme regulations set by the EU on the financial sector, which has caused troubles and led to insolvency of those two banks. As usual, other of the main causes has been the great default rate on loans and mortgages and the banks own default on interest payments. The government will just intervene by injecting 17 billion euros in the transaction between Veneto Banca and Popolare di Vicenza, and its buyer Intesa San Paolo, to eliminate all the debt margins and defaults both banks have, and also covering the whole of the expected loans and mortgages of extreme difficult payments that these institutions drag since 2008. Of the total, 5.2 billion from the government will go directly to the buyer institution, while it will also provide up to 12 billion euros of guarantee, but requiring potential changes on management and lending requirements, as well as credit risk assessments, enabling them from giving loans to people with scarce paying capacity, and who promote an intrinsically high risk of default.  Meanwhile, the future of both, creditors and depositors up to 100,000 euros will be left down to Intesa San Paolo decision, but it is expected that creditors won’t suffer any loss on their capital.

The problem with the Italian banking system can’t be solved by the government, as it is a general illness that has speeded up its diffusion through the sector throughout the last years, causing the total value of Non Performing Loans (NPL) in the country to reach near 360 billion euros. The European Banking Union has made a clear and outstanding error in its decision and has been to base its opinions on fundamentals of past cases, allowing the government to cover the costs of debt and not private creditors, as was done in the case of Banco Popular lastly. Also, we have to take into account the Italian government intervention on competition, as competitors of Intesa San Paolo will see how their options of appraisal have vanished with the protection of senior bondholders and depositors up to 100,000 euros in both of the bankrupt banks. Once more, the EU bureaucratic state has turned against free market and competition principles and has stopped being Europe of merchants to become Europe of bureaucrats.

The problem with Italian banking is generalised, as it has an enormous amount of NPL, and their underperformance is not due to mismanagement or bad advising at the moment, but due to Italy’s unprecedently low economic growth, and overall since the financial crisis and the interventionist policies it followed to counterattack the recession. Italy has found itself between the wall and the sword as on one side, it has its extremely tight fiscal policy with some of the highest corporate and income tax rates of the whole EU, and on the other side, it has de ridiculously low interest rates and expansionary fiscal policy of the never-ending stimulus of the European Central Bank. The dilemma wasn’t caused by the loans at first but is now being caused by the stagnation the Italian economy is suffering, and the only way it can be led to growth and out of interventionist ghosts is by attracting foreign enterprises wishing to invest vast amounts of capital, which can just be done with a low and flexible fiscal regime and with the restructuration of the monetary policy into a realistic and adjusted to the actual economic situation by the ECB.

The best option in this case would have been a bail-in, as it would have vanished fiscal contributors from having to pay for other people´s errors and will have transferred the costs of debt to creditors and depositors of more than 100,000 euros. The bail-in was already evited at the 2008 financial crisis, and employing instead the bailout solution was the cause of many debt and deficit problems of government, and its bonds ratings towards the international markets. The bail-in would have forced creditors to pay for all the losses and the debt whole of Veneto Banca and Popolare di Vicenza, and if any benefit or capital could have been rescued from the liquidation of these banks’ offices it would have been reinvested directly for creditors. Bail-in is normally done through a debt for equity swap, forcing them to become shareholders and participants of the bank, which is like buying a ticket for travelling in the Titanic just after it crashed against the iceberg. These new shareholders are expected to cover all the costs and essential debt while the bank is being processed through bankruptcy. 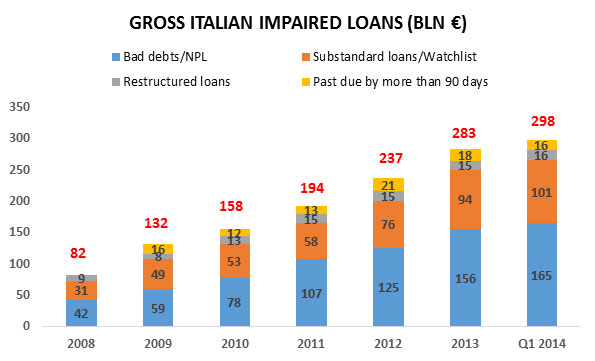 The wall for efficient and future banking has been already built by the European Union with its huge and never-ending laws and regulations, not allowing the financial sector to work as what it is… a market, where consumers needs are covered by goods and services offered by suppliers, being in this case deposits, funds or mortgages. The European Union also caused serious trouble in Greece banking system resolution and while the Irish and Spanish economies went off the crisis with policies which promoted economic freedom, Finland suffered heavily due to its restrictions and interventionist policies. The cost of 17 billion euros the Italian government will have to cover, or better said paid by Italian fiscal contributors, should be addressed to fraud the European Single Resolution Mechanism is committing, teaching us a lesson that future policies should be directed to transform the Europe of bureaucrats again into the Europe of merchants, as it should always have been. Once again, we are living the bailout fraud.