Inicio > THE AUSTRIAN SCHOOL OF ECONOMICS WARNED, BUT NOBODY LISTENED

THE AUSTRIAN SCHOOL OF ECONOMICS WARNED, BUT NOBODY LISTENED

By reading economic journals daily and revising macroeconomic data, one can easily perceive that our actual economic environment is not the best of the last few years. The whole of Europe is suffering from a severe economic slowdown that could perfectly turn into an economic recession sooner than later if appropriate measures are not taken to restructure many parts of our economic system, to at least cool down its effects. Probably, soon the US will start experiencing the same feeling, as we can observe from the most recent available trend analysis on employment, sectorial occupation and productivity. Short-sighted economic policy, as that of Mr. Trump asking for lower interest rates to the Fed, or the ECB (in great part due to the lack of structural reforms by European governments), has severe effects -mostly that it only works in the short term, and leaves a tremendous economic hangover, composed by huge debt burdens, skyrocketed deficit levels and a complete theoretical and practical lack of productivity-enhancing reforms-. We could discuss the particular effects of each policy developed by the US or the various European nations, as tax cuts, labour market reforms, failed reforms on the energy market… but a much simpler and bird-view explanation can be given by recurring to the Austrian Business Cycle Theory (ABCT onwards), by looking at how the European Central Bank has acted along the last decade, and how its actions, even if they had mild positive economic effects in the very short term, are now slowing down productivity growth, impeding economic reforms, shrinking countries in vast debt oceans… and finally, accelerating the economic slowdown.

But first of all, what’s the Austrian Business Cycle Theory? The ABCT was an economic theory primarily developed by the Austrian School of Economics from the XIXth century onwards, mainly developed by Friedrich Hayek in his book Prices and Production, and by Ludwig Von Mises in Theory of Money and Credit. Briefly explained, this theory is based on the idea that excessive increases in the monetary mass of a country (excessive credit creation) by a central bank or through fractional reserve banking, leading to artificially low interest rates, inevitably drives to a cycle of economic booms and busts. Booms are mostly formed by excessive spending, low saving and investment in intertemporally unproductive economic activities, which have false profit perspectives generated by the aforementioned monetary policy, along with governments’ lack of fiscal restraint due to near 0 interest payments on debt.

Doesn’t it sound familiar to you in relation to our actual economic environment? Well, let’s analyse it. 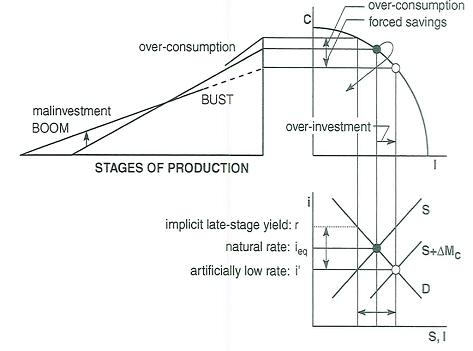 After Carl Menger, Austrian theories around capital and its contribution to economic growth and value creation have set their roots in Böhm-Bawerk’s Positive Theory of Capital, where he introduces time as a factor into economic analysis and presents production processes as a lengthy but rewarding period, in which the main input, apart from capital, is time. Time is employed in production in relation to expected future profits (interest), and capital consumption is not performed in moment t, expecting this capital to be greater at moment t+1, thanks to interest and value creation. Obviously, this is not happening nowadays, when interest rates are set near to 0% in most lending operations and at near- historically minimum rates in certain financial operations, as mortgages. The time preferences scheme is not working well due to excessive intervention, not just from governments, but from central banks. Let’s introduce some empirical evidence into our analysis. First of all, the saving rate of the European Union (average of EU 28), doesn’t even reach 10% of income from families, while in those countries most alleviated by the expansionary monetary policy of central banks; as Spain and Portugal, their respective savings rates don’t even reach 5%. It could be argued that this could be due to economic instability, lower income levels, or a million other factors, but it is completely confirmed, when we look at the data and see, that when the recession ended and European economies stabilized (while ECB interest rates continued at 0% and deposit rates at -0.4%, now-0.5%) due to the lack of interest obtained from deposits or the vast majority of financial products, income shifted vastly to internal consumption and real estate investment, creating a tremendous contraction of productive capital investment in the economy. Here we can also find a relevant factor for the ridiculous European productivity growth throughout the last decade.

This lack of savings in the European economy and mismanagement of capital also confirms the Austrian School of Economics theory in relation to the intertemporal coordination role of interest rates. Basically, when savings are high due to good economic conditions, economic agents will lend a greater share of their capital, consequently increasing capital availability in the economy and lowering interest rates. On the other hand, when economic conditions aren’t positive, economic agents will take funds out of the economy, and those who remain will ask for higher interest rates for their capital due to a higher risk environment. What this will lead to is that investment will just occur in those projects which are really profitable and secure, guaranteeing to cover the interest payment, along with the necessary collateral to obtain the loan, boosting at the same time the importance of savings. Zombie firms won’t be able to survive, while today they can freely restructure their debts, causing an even greater economic downturn in the future, when these companies finally explode.  All of these self-coordinating scenarios are impossible nowadays with massive control over the economy and its price structure by central banks.

So, let’s see which are the effects of last decade’s ECB’s ultra-expansionary monetary policy. In 2008, the ECB started its expansionary policy by presenting a plan willing to inject 200bn euros in infrastructure and strategic enterprises and sectors, which tend to be huge bureaucratic conglomerates who turn their back completely to innovation and competition. Unemployment in Europe wasn’t reduced due to this plan, and “magically” unemployment went down faster in those countries which promoted liberalizing structural reforms, as was the case of Germany, Ireland, and in a minor scale, Spain.

Even though the ECB strategy abruptly failed, in 2014 they displayed another public investment plan, this time with more than 425bn euros already given out, and nearly 80bn that will be injected in several infrastructure projects next year (2020). According to the ECB, this would accelerate economic growth in the EU by an extra 1.3% up to next year. What has really happened is that Keynesian-style stimulus has failed again, with countries as Italy or Germany in technical recession, and many others as Spain or France suffering from a high-pace economic slowdown. It is now perfectly possible to speak about the japanization of the European economy.

However, the most interventionist measures are just to come… we only have to look at several proposed European “Green New Deal” models, which speak about mobilizing billions for public investment in green energy infrastructure, which as I have analysed in previous posts, is not the solution to confront climate change. It is best to concentrate on more efficient Pigouvian taxation models and greater responsibility-enhancing measures.

Finally, I can’t finish this article without commenting on the hyperinflated ECB’s balance sheet and is failed post-2012 TLTROs.  We need to bear in mind that the ECB balance sheet is nearly accounting for 40% of the total eurozone GDP, standing the aggregate of the balance sheet at nearly 4.7trn euros, having already planned the reignition of 20bn euros monthly QE, from next November. Compare all this to the US, where the total balance sheet of the Fed doesn’t account for even 18% of GDP, being this already an impressive number. In terms of the TLTROs of 2014, 2016 and 2019, these have just incentivised massive public spending programmes in various European countries and promoted proliferation of unproductive companies, preventing a pretty necessary European economic restructuring process. 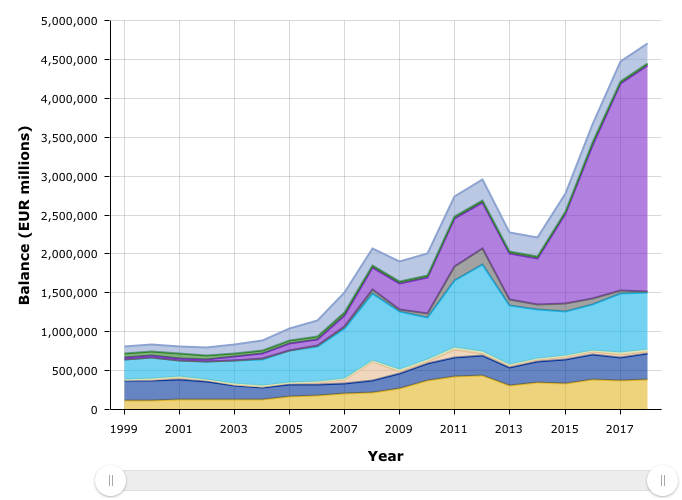 In conclusion, and as has been demonstrated throughout this article, the Austrian Business Cycle Theory was correct and can be still applied to nowadays economic environment. Manipulated interest rates have generated tremendous intertemporal disparities in production processes, have reduced margin profits and disarmed production mechanisms. On top of it, ultra-low interest payments have disincentivized public economic reforms, and impeded private innovation, reducing competition in industry.  Finally, for those who think the ECB expansionary monetary policy hasn’t had an effect on inflation… please don’t just look at the CPI, but also at ultra-low national risk premiums and bonds interest (e.g.: Greece’s 3 months bond has negative interest), inflated equities’ prices…  which are clear indicators of where that capital has been allocated.