Inicio > IN SEARCH OF THE GLOBAL CURRENCY

IN SEARCH OF THE GLOBAL CURRENCY

Lately, during the last few months, we were able to hear many politicians and statesmen talking about a greater integration of the various countries into the European Union. As a liberal, I’m not opposed to an increased cooperation between European nations and their leaders, and even on several occasions I’ve proposed the creation of the United States of Europe, but not with the objective of intervening to a greater extent into people’s life, but to liberalize the economy by opening markets and reducing frontiers. This week, with the Bitcoin revalorization, which topped gold’s value for the first time in its history, closing at $1,268 on Friday, while a gold ounce was being sold at $1,233. So, why not to think about a global currency backed by Bitcoin, and being the definitive solution for trade barriers and the best complement for globalization?

Everybody seems to admit that entering the euro was the best possible decision that they could have taken, except obviously for the Greeks, that as every left-wing government tries to find excuses for their failures backed by external agents. With the implement of a single currency the monster of devaluation would end up definitely, and countries will face real competition on added value rather tan just bulk prices. The devaluation game nowadays in the economic and trade atmosphere is unfair, as Denmark has a strong local currency, with a very well established central bank, that offers a deposit rate of 0.75%, making companies even repay their taxes to promote such policies going on for several years. On the other extreme, as previously mentioned, we have Greece, which had to set up a “corralito” (bank freeze) in order to prevent capital outflow from occurring in the country, allowing its citizens only to withdraw 60 euros per day.

IN THIS GRAPH WE CAN OBSERVE A COMPARISON BETWEEN THE VARIOUS INTERNATIONAL CURRENCIES´EXCHANGE RATES: 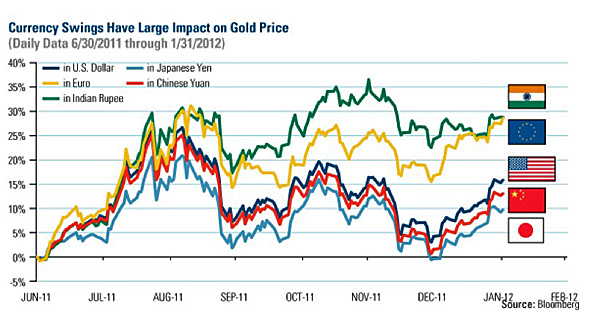 Some companies as Apple might also be affected by a global currency and the vanishing of the risk that other currencies carry along with them. Apple’s capital was registered at 160 billion in 2014, and just from that money made 1.7 billion from interest and dividends on profit, why? Very simple, because of dollars, which seem to have standardized the rest of currencies, being the new gold and benefiting American firms from it. There are great companies in some “unicorn dominated” nations that would love to be financed at that rate and have a dominant currency in its hands but have to cope with its devaluated paper to confront the market. Nothing new to ay, but as always, central Banks and their inflationary and expansive policies ruin whole countries and its enterprises by reducing their competition internationally.

During the global economic bubble in the pre-crisis period at 2008, we could see how the various nations were enjoying globalization and with it, its financial perception. Capital inflows were as easy to seen as a dog in the Street, and foreign firms were investing in other countries every day, diversifying their operations, and trying to reduce their risk, which was really base don a mistaken perception. Rating agencies were making clear hyperinflated estimations of growth during the crisis, but due to the credit crunch; and thanks, God, firms entered in a savings period, overcoming the hyper-low interest rates of the various central banks.One of the greatest effects of the crisis was a reduction in FDI between nations, caused by the gap which had been created in contrast of the different currencies, and its exchange rates which were deeply affected by governmental decisions.

WE CAN SEE THE BITCOIN EXCHANGE RATE WITH USDIN THIS GRAPH:

Many people have been complaining for the years of globalizations and its effects, but it should be clear to all that money doesn’t travel due to climate conditions but attracted by business opportunities which often are created by a stable currency and a deregulated market system. After the crisis, many international investments started being made through foreign enterprises which acted as tax havens, and FDI didn’t genuinely stabilized until 2012 and furthermore. Normally, fiscal regimes, political decisions, and macroeconomic policies are variables depending on each country, but this could be reduced by introducing a global currency between the major trading partners as the US and the EU, which will force China to join the currency afterward, to prevent being excluded from the international market. This new currency would provide investors and analysts a much more detailed information and would provide a stable economic environment, promoting international trade and cross-border business. Financial resources through the world are not equitably distributed and many times that is caused by currencies’ management by nations such as China, which devaluate the yuan to intimate levels, reduce competition with manufacturing exporters such as the US or Mexico. These policies should be eliminated , and taking monetary policy out of control of particular nations would be the first step, advancing towards the global currency and a more integrated economic system, with similar regulations and interest rates. Increasing credit reliability through the solvency of this new currency will offer investors a wider market nd will possibly be the best weapons to help emerging economies throughout their uprise. Many factors as corruption or political revolutions can’t be taken into the analysis, but the main centered point is that with the single currency, global financial and monetary concerns will be reduced to minimums.

States out of the EU nowadays have been printing their desired amount of money all way long, and the value of it has been cut as a complement of monetary mass expansions, reducing credibility and economic sustainability. An obvious example are German “landesbanks.” which after the financial crisis period were looking for investment opportunities outside their nation, but always into the EU, as it offers them a secure base of currency correlation, and in some way, belonging to the same “club.”makes trust member countries in a way they don’t do with foreigners, providing European countries with a financing advantage that much of the world couldn’t enjoy. This panorama could be changed through the years with the use of a global currency, facilitating financial operation between countries and flexibilizing access to credit.

When talking about this theme with many people, they have all asked me the question of who and how would manage this system. Of course, for the US to accept the use of a global currency, they should be the ones to control and manage the new money in circulation, as nowadays the dollar is te nearest example we can have an international currency, due to its correlation with other many. Bitcoin would be of great use as a standard for our new global currency, as it has a decentralized management structure and its a system that works without government intervention, and it’s just regulated by the most basic impulses into the financial markets- supply and demand. Otherwise, “mining” of Bitcoin would allow certain measured and controlled monetary expansions, but as always, in my personal opinion, I’m strongly against the use of printers.

Many people think that implementing a global currency is a pure utopia, and obviously, it has its difficulties, obstacles, and complexity, we shouldn’t negate that, but, wasn’t the euro a severe and harsh project? Hasn’t it been a success? Many people still criticize it nowadays, while what they really want to express is their love for printers. The euro has served to break down commerce barriers, promote globalization and provide consumers with a wider market, allowing investment diversifications, and to reduce the development gap between European countries. It has been a success. And the global currency will be.