Since the beginning of the 1970s, and the consequent boom of globalization, the world has seen how unfettered trade and business has brought many benefits to our societies and has fostered development in nearly all areas of economics in terms of human development or GDP per capita. Even more, every single country in the world, excluding those communists’ states as Cuba, Venezuela or North Korea, each other country has seen its poverty rates wildly reduced and astonishing economic growth followed by tremendous improvement in living standards. In terms of poverty, global poverty rates have been reduced from around 40% of the world population living under the poverty threshold in 1970 to less than 9.5% of the global population finding themselves under that threshold. Independently of this, one of the main concerns that have arisen during the last decade in the modern world, mainly in European countries and the US, has been that of inequality, mainly income inequality between different sectors of the population as well as between nations. Overall, the effect of inequality on economic growth depends largely on the productive model of a country, so a clear response to the question about inequality affecting economic growth is still unclear.

Scholars’ trend in the 1950s and 1960s was to think that greater inequality could foster economic growth. They presented this through two different mechanisms. Firstly, they displayed the idea that greater inequality could create a greater incentive for people to work hard a try to reach the highest wage’s range, increasing competitive pressure in the labour market and constantly rising productivity levels, as workers try to increase their output constantly and offer better quality for the same wage, resulting in more productivity for the firm and the aggregate economy. Also, this inequality could lead to greater investment, at both, the individual and the corporate level. Greater differences in the rate of return between companies, in the first place, will lead to firms with lower ROIC (Return Over Invested Capital) to do a greater investment into capital goods that could result productive in terms of greater efficiency, by increasing output and reducing the unitary cost of production. This investment will allow the firm to have a price competitive advantage in the market, by offering its products at a lower price that the partial equilibrium of the marketplace, attracting a greater volume of demand, and consequently generating profits.

Equally, looking at inequality between individuals, this argument could be applied as well to the situation. High income inequality in the population could lead to greater investment in education and further studies. Differences in wages will cause people to develop more their studies and their abilities to be able to perform better in the labour market and earn higher wages. This greater investment in education will lead to higher growth in two different ways, firstly by the direct expenditure in education services and goods associated with it, which will add to GDP calculations in terms of C (consumption), and also through an increase in productivity level of workers. If they improve their skills they will be able to generate more output in the same amount of time, while their use of technology and various other skills might have also improved, causing efficiency levels to skyrocket in the overall economy.

Overall, inequality can also lead to greater economic growth by stabilizing consumption levels, as people with higher incomes tend to save more and invest more to revaluate their income, which contributes to the supply-side of the economy, while people living on mean and low wages tend to spend a greater percentage of their wages, somewhat boosting economic growth and fostering prosperity by covering the existent supply in the market.

On the other hand, many other economists, as John Kenneth Galbraith or Joseph Stiglitz have argued that inequality is not only socially immoral, but also has severe harmful effects for economic growth and socioeconomic development. Greater inequality can reduce the professional perspective for a worker by reducing the available opportunities he has in the labour market by decreasing social mobility, which will limit the economy’s growth potential, due to lower. Mobility of resources around the economy, mainly human capital, which will cause a great volume of resources to be unemployed, causing production to be inefficient and contracting trend growth. From the theoretical perspective, it has been proven by the above-mentioned economists how greater inequality has a direct relationship with lower social mobility, as if means are of restricted access for people with low wages, they won’t be able to perform certain actions to go and live to other countries or change jobs. For example, if you are living in London, and you have a house, but you are unemployed, and suddenly you are offered a job in Manchester, maybe if you don’t have enough money to rent a flat in Manchester for the first month before receiving any income stream, you might not be able to accept that job.

Inequality can also affect politics, which are closely related to economics, and we have been able to observe throughout the last two years how inequality encourages populism and nationalism, which normally lead to isolationist economic policies, increasing costs of production through higher tariffs on imports, and tend to generate tremendous level of public debt through unfettered increases in the level of public spending, reducing the demand for sovereign bonds of the country in the capital markets, and forcing it to raise the offered rate of return, consequently increasing future liabilities for the emitter country.

It is pretty difficult to provide empirical evidence of inequality’s effect on economic growth, as data are not always conclusive, because they are different depending on each country, and correlations between inequality and growth data are not always stable. Economic growth can be affected by thousands of different factors related to politics, sociology and economics, so we cannot relate the rate of growth to just one cause as inequality. Equally, a pattern is formed depending on a country’s development. When a country is still developing, the return from capital tends to be lower than the return from human labour, as was studied by professor Robert Solow from MIT, and Nobel laureate in 1987, consequently dropping productivity levels and having negative effects on economic growth. 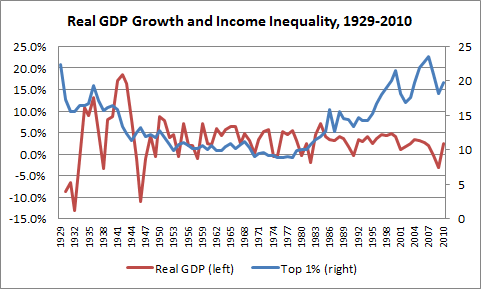 To conclude, inequality is something that should worry us, as it is not only a matter of social justice but also of economic growth and future development. Other thing, is how are we planning to tackle that inequality, as the correct way will be leaving markets to function freely and promoting technological development to reach every area of our lives, bringing inclusivity to the labour market, and consequently fixing partially the wage gap.