Inicio > DO YOU WANT A SOLUTION?... LOWER TAXES

DO YOU WANT A SOLUTION?... LOWER TAXES

Really, it's funny hearing by television and radio to certain political and economic personalities, when referring to foreign investment and jobs as favors granted to our country, simply because the image that is giving , or tries to give. And all these people expect, that when Spain has reached a debt of 100% over GDP, with levels similar to Japan; people still have desire to continue to invest, also knowing in consciousness that in recent years, in Spain a program of increased debt over GDP, deficit delays, and a tremendous fiscal drowning which has done more to curb growth, has been severely developed. But that is not the worst, and is that the people of "the smile revolution", or those politicians who try to pretend to be Leonardo Di Caprio, dare to say that the increase in debt is due to austerity programmes carried out during the last mandate, which have been based on the reduction of taxes as much as possible increasing 4% growth in comparison with previous years, as many companies have become to see incentive to lay its premises in Spain, being rewarding in most for their efforts.

In this country it has been thought for a long time that the best solution for the creation of employment and reduction of debt is based on an increase in public expenditure, which has proven to be a very wrong attitude. If we look back we can see how meaningless public spending doubled in the time before the economic crisis, or as being already in times of recession not to paralyze useless public works projects, such as always empty, or AVE lines that connect two cities, whose trip is faster by car, and that makes half of the wagons to be empty , but yes, we continue showing off our great and unnecessary infrastructure. A particular case which we can take note as example is the rescue to public savings banks, which boasted of being one of greater solvency of European banks, while hiding red numbers after the back-filled leaves, that yes, even though rescued, just in case if perhaps there wasn't enough spending. My favorite case is that of the autonomic communities, which are intended for more than 40,000 million a year, by a pure motive of representation, and a nice excuse for false growth; which confirms the typical utopia that rising expenditure reduces the debt. We have been hearing for years that liberal policies in economic term are extremely austere and may be harmful to the population, but they have not thought that if it were not for those economic policies would not lower the deficit 4 points, or are growing at 3% annually? Or but simply because we are leaders in job creation in Europe?

HERE YOU CAN SEE A GRAPH DEPICTING THE PROGRESS OF ECONOMIC GROWTH IN SPAIN IN RECENT YEARS: 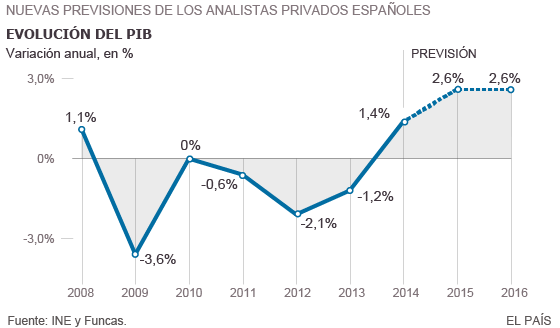 This past week we have seen one of the new proposals of Spanish interventionists, and this was to create another tax, this time earmarked for the Pension Fund, similar to the tax which was established in France in 1966, and which has made that pensions to be steadily cut since then. We have seen that higher taxes don't make more effective or sustainable the  pension system, and the only necessary solution to make this Fund increase and our elders to be able to enjoy a better standard of living, is through the promotion of job creation in the private sector, which is produced directly by a higher rate of consumption , and leads to greater economic growth, due to increased productivity and efficiency in the market.

In the end the solution to everything is lowering taxes, as we have already seen in certain countries of the European Union in recent years, which have raised much more money and have a higher rate of growth. A great example can be United Kingdom, that reduced  the tax to all businesses, and raised a 2.4% to the previous year in terms of corporation tax, which shows that a greater liberalization of the economy and a policy of retrenchment has worked in this country. Spain, a country that was the bankruptcy of the EU, and suffered one of the biggest economic crisis in its history, has managed to move to a 3% growth-based reductions of taxes and incentives to consumption, in a period of just four years. Greater job creation has also been achieved, due to an increase in exports and a major opening of the market to the outside.

THIS GRAPH REPRESENTS THE VARIATION OF INCOME TAX OVER THE PAST DECADE, AND ITS EVOLUTION IN COMPARISON TO GDP: 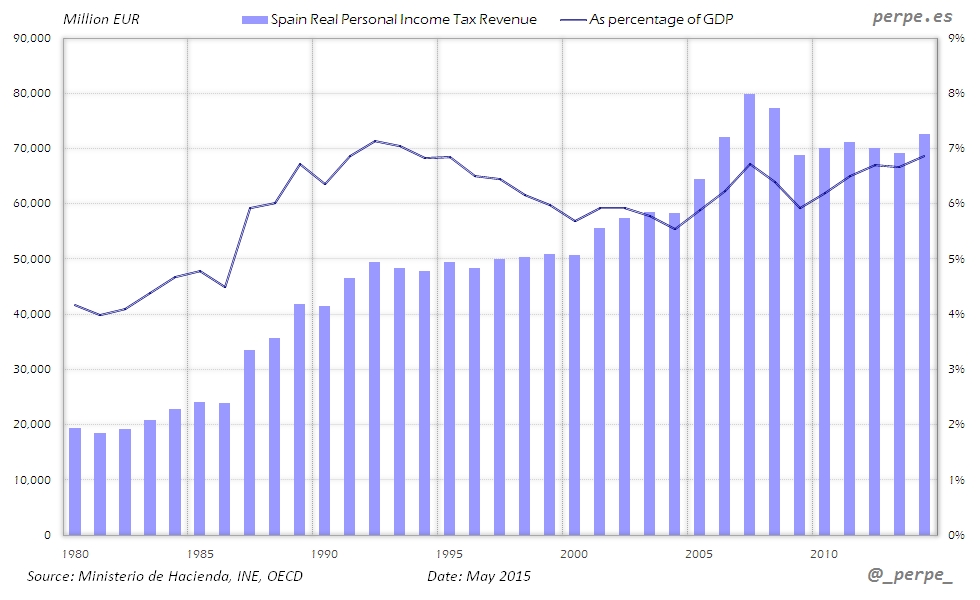 Interventionism has already shown its ineffectiveness and poor practices, producing tax hikes and increases in deficit due to higher public spending earmarked for thousands of secondary reasons, breach of all economic targets which were fixed by those of "the revolution of the smile". Now is liberalism's turn, since we are in a new time in which the Government has to defend a lower fiscal drowning for the support of entrepreneurship, thus producing higher employment, which have  their wages linked to the productivity of the company, increasing efficiency in the market. And remember, as the great Milton Friedman said once: "A society that puts equality above freedom, will end without equality nor freedom".