Inicio > DID YOU KNOW THAT INCREASING THE MINIMUM WAGE IN SPAIN DOESN’T BENEFIT WORKERS?

DID YOU KNOW THAT INCREASING THE MINIMUM WAGE IN SPAIN DOESN’T BENEFIT WORKERS?

Since the last general elections in Spain, we have seen several political leaders declare in favour of a higher minimum wage rate in this country in the next year. Their proposals about this theme are mainly centred in the government being the principal character, and forcing to introduce a higher minimum salary into the labour market, having no correlation with the local economic growth . But there is one thing that this left-wing new parties have not thought about, and that is productivity. Anyone who has received a pair of economics lessons should know that wages are directly related to the productivity of the human capital of a firm, so in general terms, if a company produces higher amounts of its product, they will be able to sell it at a low price in the market and be more competitive, rising its benefits and automatically (in theory), the wages of the workers of that firm. Actually, the minimum wage rate in Spain is fixed at 658,20 euros per month, having some new proposals of certain parties wanting to increase it until 950 euros in the period of a year, increasing it by a 22% in the first two years, and 45% by the end of their legislature. But, what will be the consequences of a rise of the minimum wage of this characteristics?

Firstly, salaries, are directly correlated, as well as prices of any good or service, to the demand for each of them and the level of production of each company. Salaries can’t be fixed by law in a general way, as this will create very high economic instability and will make the demand for labour in the market fall immediately, as the production costs of companies will increase in an enormous way, but the levels of output will remain the same, generating mayor loses. A very high minimum wage in contrast to a low level of productivity will end up generating higher unemployment levels, a hiring new workers for companies, will simply be not profitable. Forcing a very high minimum salary will be especially harmful for low qualified workers, as if their jobs are very simple, there will very high supply of labour, and with a high minimum wage, the demand for those workers will go down, as their jobs will be replaced by automation, which will be far more profitable for companies, and will create higher competition in the market, as we know that machines are much more productive than humans in almost all aspects of production.

There is an examples that applies perfectly to this situation. It was the year 2009, when the federal government of the USA fixed a minimum wage rate of 7,25 dollars per hour, but one of its states, Seattle, decided that they were going to impose a different, and much higher minimum salary, of exactly 15 dollars per hour. At first, almost everybody in Seattle saw this as a very good decision that would increase supply of labour, and it did, but what they didn´t realised was that the demand for labour will fall enormously. We could see how in the year 2013, all the employment that had been created in the last decade had been almost destructed completely by the incredibly big levels of unemployment, that had increased more than one point. The labour market just restructured when the economy stabled again, following the economic growth rate, which made the the demand for labour increase freely, reducing unemployment. When the minimum wage rate is risen, normally the GDP of a country doesn´t seem to be greatly affected, but the labour productivity decreases enormously.

IN THIS GRAPH WE CAN OBSERVE HOW AS THE MINIMUM WAGE RATE IS RISEN, THE LABOUR PRODUCTIVITY DECREASES, WHICH MAKES UNEMPLOYMENT GO UP (APPLIED TO SPAIN): 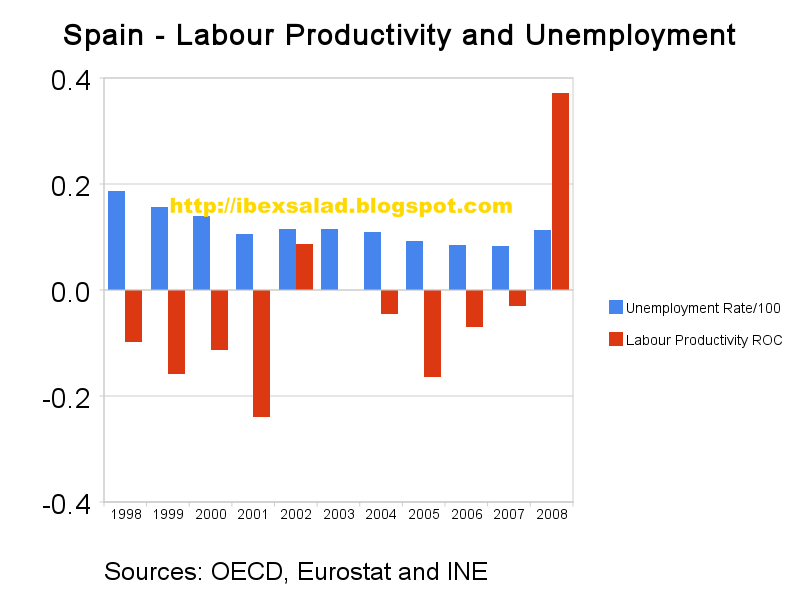 Secondly, we can see that when the minimum wage rate is risen significantly, the possibilities of losing their job increases between the low productive workers, affecting overall the young people, and adults over 45 years old. In this two years’ groups, as we have said before the most affected ones are the low qualified people, mostly in the secondary sector, as there is a very large amount of supply of labour. Many governments, countries and political leaders talk magnificently about the Nordic countries and their perfectly balanced labour market. But political parties that support a high minimum wage are ignoring, that these countries are the ones enjoying the lowest minimum salary, and the lowest unemployment rate, also complemented by the highest wages in all the EU. This is caused, because employers can reduce the costs when they set up their company, having a faster economic growth process, and being easier for them to develop the firm, and as the workers show high productivity levels, they will be rewarded with higher wages to balance the costs and benefits of the enterprise.

HERE WE CAN SEE HOW THE MINIMUM WAGE RATE HAS BEEN RISEN THROUGH THE LAST DECADE IN SPAIN, INCREASING THE UNEMPLOYMENT RATE: 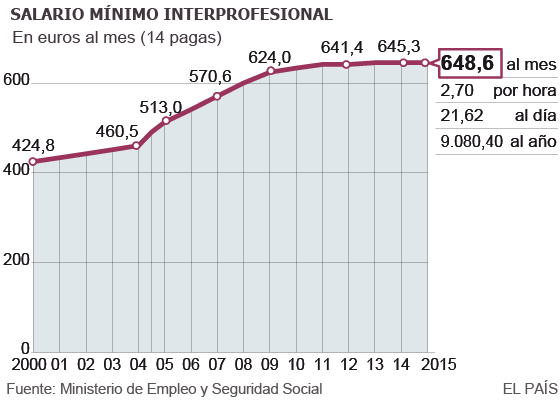 In conclusion, the economies with the most flexible labour markets, which don´t even have a minimum wage rate or any type of costs related to firing the worker, are the ones that enjoy the lowest unemployment rates and highest salaries for the standard worker. The most interventionist labour market models as Greece are the ones that have lowest salaries of the EU, as many companies just adjust their costs to the minimum wage rate. These countries are also the ones with highest unemployment levels, as we have seen recently, caused by the scarce demand for labour and the minimum new companies that are set up in those economies. So we could say that the countries with highest liberty and flexibility in labour matter, are the most beneficial labour markets for the mean worker, as through competition in the market, the salaries will be naturally risen, with no need of intervention from the government. Because as Frederick Hayek said:  "The ultimate ends of the activities of reasonable beings are never economic. Money is one of the greatest instruments of freedom ever invented by man."

In my opinion, minimum wage rates should be totally eliminated, but the governments should introduce an obligatory productivity bonus to the salaries of each worker. This will link productivity totally to the wages, motivating workers to produce much more, making them more efficient, and allowing wages to increase, according to the economic growth,which will help to balance the labour market model. On top of it, this will make the intern demand of the country rise in general terms, as consumers will have more dispossable income to spend on goods and services.