We have always been told that China is an economic miracle since the 90s. A relatively new growth model dominated by state intervention, while allowing market mechanisms to function, leading some economists and politicians to even denominate it as “market communism”. We have been severely lied over the last ten years. China is not an economic success, and neither an example of a capitalist society. If we still want to frame China in a specific socioeconomic denomination, we could describe it as “crony capitalism” or “Statist capitalism”, even though it may sound as an oxymoron. Some people will find this denominations as quite bizarre, but that’s due to our lack of real economic information, with mass media just showing off the positive face of China’s economic perspectives and results, as for example its growth rates, which have been over 6.5% for more than a decade now, leading to many misunderstandings and misinterpretations of the reality underlying the Chinese economy, at least since the 2008 financial crisis.

First of all, we have to admit that in what refers to economic growth and GDP per capita expansion, China has done relatively well in contrast to rival economies; even considering its large potential growth, due to it being an emerging economy, it has overperformed many of its direct rivals as could be India, South Africa or Brazil, all of them from the BRICS block, along with Russia. Perhaps, the most contrastable example could be India, due to its similar primary characteristics at the beginning of their development process (attraction of low value-added activities, low labour costs, abundance of resources…). While India has been growing at a mean similar rate to China, the Chinese economy has developed a much more important role on the international level, mainly due to its great exports of services (legal, technological, financial, corporative external support, customer relations…), passing from a share of 6% of global GDP in 2008, to nearly 16% nowadays. If this data is presented just like this, it may sound as a tremendous economic miracle, making all of us display posters of Xi Jinping all over our rooms! But the reality is not just this figure, as nowadays the Chinese economy is one of the most indebted in the world and has an extreme reliance on alien capital for its correct functioning. Loans have been defaulted many times, with unpaid corporate bond adding up to almost $10bn this year (up to November).

The worst of all, is that these preoccupying signals haven’t been averted by anyone until growth prospects have been devalued and alarms have jumped in foreign investors bureaus. Everybody thought that the rocket will always keep on surging, but nobody considered that the fuel deposit was emptying. Everybody saw 2008 stimulus as a wonderful magic trick. No economist; or almost no economist, dared to confront this consensus theory. It was time for Keynesianism with a string of interventionist reforms to facilitate access to credit and promote easy money for greater consumption. This unbearable party included extremely low interest rates, lower capital requirements for banks, and expansion of the monetary mass… which definitely caused the yuan to plunge and led to an extreme dollarization of nowadays economics. And some economists still dare to blame the US for what was China’s unconsciousness. Debt jumped from 150%/GDP to more than 250%, a clear indicator of upcoming instability and future impoverishing reforms, with a probable drastic reduction in productivity levels and secular stagnation; if structural reforms are not made in time, which doesn’t seem to be happening. 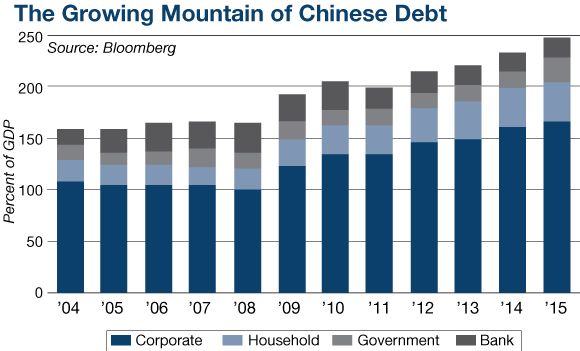 This situation is just economic history repeating itself, or do I have to remember Japan’s case, being the global leader after the US in the 70s and 80s, with incredibly high growth rates and socioeconomic development… until Abenomics and its effects came, leading to stagflation and frozen productivity levels, followed by a demographic issue which seems difficult to solve and poses a tremendous problem for the near future.

The situation requires us to be critical and realistic. China can’t keep growing at the same pace while it pretends to deleverage and reach levels “proximate to those of Europe and the United States”. Some interventionists economists, as Krugman, have assessed that China could win the trade war by devaluing the yuan even more and lowering interest rates to minimum levels, consequently injecting incredible amounts of capital into the economy. But doesn’t he remember China has got overcapacity levels for at least the last half decade?

Devaluation won’t cause exports to boom, and even if it does in part, the impact on savings and salaries will be much worse. Recurring to the sticky wages theory we will see how the “monetary helicopter” will take much less time to increase the monetary mass than the time firms will take to level up salaries and equilibrate them to real purchasing power. In other words, those that will benefit from a lower yuan or an expansion in the monetary mass will be those who have primary access to the freshly printed notes, or those exporters of low value-added goods, which tend to be much more price elastic. Richard Cantillon will surely agree with me, but Keynesian economists seem to have forgotten to learn about the Cantillon Effect. A further devaluation of the yuan, or a lowering of interest rates will decrease the cost of future debt but increase the cost of debt which was previously acquired, meaning a severe reduction in repayment capacity for individual consumers and businesses.

On top of it, some people might still think that having observed past results and the current economic environment, even if the People’s Bank of China (PBOC, China’s central bank) decided to drop down interest rates, this wouldn’t make commercial banks become crazy and start giving out loans as free. Well, this argument could be accepted in regions as Europe, where public banking takes only a 15% of the total market share (for me it should be 0%, but that’s another issue), but it definitely can’t be accepted in countries as China, where the government has got indirect control over more than 80% of banks, in terms of participation and property of shares. It means, that central bank actions and commercial banks reactions are much more closely correlated in countries as China than in Europe or the US; where (thanks God!) the banking sector tends to be more independent.

At last, but not least, some readers may have also thought that China’s tenancy of $1.17trn of American treasury bonds make it immune to market reactions and that it has complete control over forex markets all day long. I’m sorry to say it, but this is an absolute complete lie. China isn’t only the major tenant of US treasuries, but it isn’t either the second; which is Japan nowadays (with the first being the US market), but also several studies, as one presented at the NBER (National Bureau of Economic Research), by Eswar Prasad and Shang-Jin Wei, show that US capital markets could absorb the totality of China’s US debt in less than five days, at actual trading rates (2017 data).

To conclude, once more we have been able to observe how a mix of economicdirigismeand Keynesianism have once more failed to solve the problem of incentivizing real productivity. Supply-side policies as tax reductions accompanied by cuts in ridiculous spending should be a possible way of solving this horrendous situation, but also a difficult one, considering that China’s public expenditure is just 14.3%/GDP. That’s why the situation is so difficult, as monetary and fiscal resources have all been used up, and supply-side policies are tremendously complicated to implement without destabilizing the system. Chinese economics are, as always, an enigma for the rest of the world. We’ll see to what it finally comes down to this time.